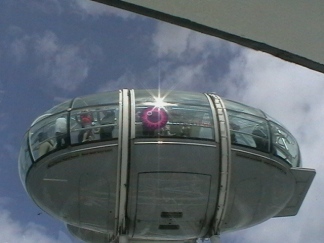 “Arjun, I’m scared”, Devaki cast an uncertain glance at the gigantic structure looming before them. Despite the summer in London, she pulled her jacket closer to her. From where she came from, 20°C did not equate to summer temperatures.

“Amma*, don’t worry about it. The London Eye is perfectly safe. More than 60 Million people have already ridden this and there have been no accidents so far. Just come with me. You will not forget this experience.” Arjun guided his mother into one of the ten-ton ovoidal pods. Devaki soon lost all her trepidations and became mesmerized by the magnificent vistas the city of London, its skyline and the serpentine river Thames threw nonstop at them.

Arjun watched his mother. He remembered his first ever Ferris wheel ride. As a six-year-old kid, naturally, he was scared. It was his mother who, despite her own fears, sat beside him for the ride – her palms securely engulfing his small hands. Her eyes were shut fast. But he never felt fear again.

Devaki turned with her eyes open with wonder.

“Wow! Is this Thames? Arjun, I’ve seen this only on the Atlas. Thanks for bringing me here, Kanna†.”

Many thanks to Al Forbes for hosting Sunday Photo Fiction – A weekly challenge that encourages you to write a piece of fiction within 200 words based on the photo prompt. To read other fantastic entries to this challenge and enter your own click here. Many thanks to A Mixed Bag for the photo.